“Snowflakes are one of nature’s most fragile things, but just look what they can do when they stick together.” ~Vista M. Kelly

Residents of Jackson, Wyoming are no strangers to the dangers of avalanches. Milepost 151 on US 89/191, otherwise designated by Wyoming Department of Transportation (WYDOT) as ‘151 Avalanche,’ historically experiences one to two avalanches each year. Luckily, no deaths have been associated with the avalanches; however, the avalanches have struck vehicles, caused accidents, and created plenty of havoc for winter driving.

In general, most avalanches occur on slopes of 35 to 45 degrees. Ski resorts with ‘expert’ slopes are a maximum of 35 degrees. The 151 Avalanche area itself rises 1,140 vertical feet with grades exceeding 40% (read Perfect Avalanche Slope Conditions) directly above the highway. The use of snow sails, which aim to disrupt snow drifts and block wind from carrying snow to the slide path, were only partially effective. So the Jackson South Snow Structures project was developed to further reduce the avalanche hazard on the roadway at the 151 Avalanche.

In consideration of the European (Swiss) standard-of-practice guideline for the site specific design, the project features 90 metal avalanche structures, 5.5′ high by 12′ wide, installed perpendicular to the hillside. The snow supporting structures sit as a constructed defense in the avalanche starting zone, acting as anchors to help hold the snowpack in place. Better yet, the snow support structures operate independently, thus reducing costs on winter maintenance personnel resources during storm fighting periods.

In Design with the Natural Landscape

To overcome the look of straight rows of engineered fencing, the engineers from Interalpine in Sedona, AZ, staggered the placement of the snow support structures to better blend the structures into the hillside with the use of native vegetation as screening.

Amy Taylor, botanist and former president of the  Wyoming Native Plant Society President, was charged with the task of selecting plants for the screening. The 151 Avalanche area is within a critical habitat and migration zone; therefore, the use of native plants that were genetically similar to the surrounding fauna was Ms. Taylor’s main focus. Saplings were selected from surrounding forest and hillsides, then temporarily potted and cared for at a local nursery until they could be transported on installation day. The native species selected included the following.

“Can you guys fly a few hundred plants up in a helicopter for us?”

This is when The Tree and Landscape Company (TLC) comes into the story. TLC was contacted a few weeks before the actual plantings were to be installed and asked if we could plant a few trees and shrubs on a hillside – one catch, it was on top of a mountain. All plant materials including water holding amendments, tree shelters, stakes, 1,000 gallons of water, 1,200 feet of hoses, and all the tools required to install the trees and shrubs would need to be flown via helicopter to the top of the mountain.

With fast response and expedited shipping from our suppliers we were able to get all of the required items delivered and packed into helicopter bags on time. While we usually cherish our weekends in the Tetons, our crew was excited to work on this particular Saturday. For most of us, this was our first ride in a helicopter.

Up Up and Away 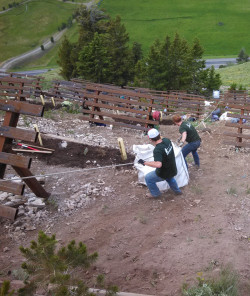 The day was windy and warm. The pilot was experienced and serious; he informed us that under normal circumstances we wouldn’t be flying in winds this high. The project manager assured us that our pilot was the best around. After a few no-nonsense instructions, we were in the air – Wop wop WOP WOP WOPWOPWOP.

The pilot dropped us off at the top of the mountain. We prepared for the first material drop; each of us had a task. My adrenaline was pumping. As the first load came in, I reminded myself of the first rule – keep your eyes on the load and don’t look at the helicopter. If you looked up at the helicopter, you would see that it was blowing all over the place; yet somehow the load was coming in perfectly positioned (Don’t ask me how I know this, my eyes were on the load at all times).

Unhook the load, helicopter off, back down the mountain, next load – the pilot was fast. 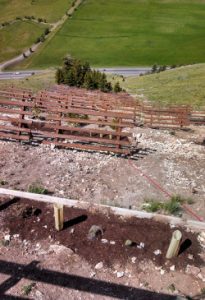 To ensure the survival of the transplanted native plants after our retreat from the mountain, a few specialized tactics were implemented. DriWater™, a vegetable-based cellulose gel, holds water in a solid state and slowly breaks down for a time released irrigation solution that delivers water directly to the roots. Mixed into the soil with DriWater™, we used Lassenite, a water-retention mineral substance called Pozzolan derived from volcanic ash. Lassenite particles function as tiny reservoirs that release water to plants and promote a deeper, healthier root system. A healthy root system helps plants resist disease, drought, and other stress factors.

We dressed the top level of soil with a prepared mix aimed at providing organic material, aeration, and moisture retention. And to protect the plants from browsing wildlife, we installed tree shelters, mesh protection, and a combination of organic animal repellents.

TLC is proud to have worked on this project with so many wonderful project partners. Our impressive suppliers stepped up to the plate to deliver products on time on such a short notice. And it is great knowing our work will help keep future travelers safe from potential avalanches.

Watch a video of the final load drop. This one was the diciest of the day with the winds howling.

For detailed information about the entire project, please read the full report here

Stay up to date on exciting projects from The Tree and Landscape Company.

Call Today for a Quote!

“The best friend on earth of man is the tree: when we use the tree respectfully and economically we have one of the greatest resources of the earth.”
– Frank Lloyd Wright